The Muscipula Dioneae, also known as the flytrap, makes them fantasize more than one thanks to its ingenious trap.

Indeed, its trap is worthy of trappers’ ploys of the past coupled with a mechanism with a threshold action.

As shown in the following image, each trap is made up of two sheets called lobes, linked by a midrib. 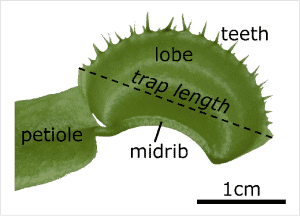 Thus, inside each of the lobes, at least 3 hairs are present. These have the function of counting how often they are stimulated. If one or more of the three hairs of a lobe is stimulated at least two times within 20 seconds, this will trigger the electrical signal necessary to close the trap. 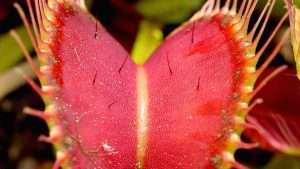 Once the trap is activated, the outer lobe will inflate thus creating an inward constriction and the trap will close in a time ranging from 1/3 seconds to 3 seconds depending on the vigor of the plant.

Once the trap is closed, glands on the periphery of the trap will secrete a mucilage, a substance composed of carbohydrate to seal the trap in the event that the prey is digestible for the plant. It is extremely important to note that carnivorous plants are actually insectivorous plants. Thus, any fatty food such as meat would be rejected within hours of the trap.

As strange as it may seem, once the prey is digested, the trap will reopen and the exoskeleton of the insect will be present. Thus, the digestive enzymes of the plant will have digested all the nutrients of the insect and the structures having no nutritional value for the plant will persist. These will then be cleaned by wind or rain in a natural way. 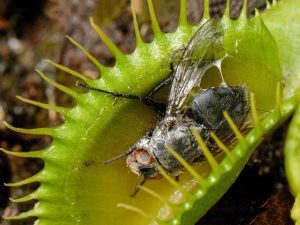 Here is the simplified explication of the trap of the muscipula dionée!